Join our Circle of Friends

Receive updates about our research and events

Connect with us on social media

FSH Muscular Dystrophy (FSHD) is a disease that causes the progressive deterioration of skeletal muscle, robbing people of the healthy, independent years of their lives. The main diagnostic features of the condition are loss of muscle in the Face, Scapula, and Humerus (arm). In the medical literature the disease is referred to as facioscapulohumeral muscular dystrophy; however, we simply refer to the disease as FSHD (sometimes shortened to FSH), since muscle loss is not limited to the face, scapula, and humerus.

Summary of Evidence-based Guideline for PATIENTS and their FAMILIES

Signs of FSHD typically appear in early childhood and teenage years with 95% of affected individuals manifesting this disease by the age of 20. One in four people with FSH will eventually require a wheelchair for mobility. Many of those affected by FSHD are unable to lift their arms for more than a few seconds, lose the ability to show any facial expressions, and experience serious speech impediments. Other symptoms which may impact someone with FSHD are a loss of hearing, vision changes, and abnormal heart rhythms. In short, FSHD eventually affects virtually all muscles in the entire body. See Auction History page for the most recent videos created for the FSH Auction about how FSHD affects real people.

FSHD is estimated to be one of the most common progressive muscle diseases, affecting at least 500,000 people worldwide. The actual prevalence of the disease is likely much higher as FSHD is very often misdiagnosed due to varying presentations and lack of awareness. Approximately two-thirds of cases are inherited, getting the disease from a parent. One third of all cases of FSHD, appears to be the result of a spontaneous genetic mutation.

FSHD is currently thought to be caused by a gene called DUX4. Unlike genes causing other genetic diseases, DUX4 itself is not mutated. In fact, it is usually kept locked up and silenced so that the gene is never turned on. The reason DUX4 never turns on is because it is a repetitive DNA element, meaning that the gene repeats over and over again, forming a long chain. The chain, called D4Z4, is usually repeated up to 200 times; however, in patients with FSHD, there are typically less than 10. This picture here shows what 4 DZ4Z units look like in a row. The orange is the DUX4 gene. The blue triangle is one chain link of D4Z4.

Why does a short D4Z4 chain cause DUX4 to turn on? The answer is that we don't know - but we have a pretty good idea. Usually repetitive elements in the genome zip up, making the DNA fold up really tight, like a skein of yarn. When the DNA is all wound up, DUX4 can't turn on. Somehow, the cell knows to zip up DUX4, but sometimes it does not.

As with everything, there are exceptions to the rule. For example, we used to think DUX4 would unzip only when there were less than 10 D4Z4 chains - but groups of patients were identified that had more than 10. Something different was happening in those patients. Researchers found that mutations in another gene, called SMCHD1 (smootch), were causing a second type of FSHD, called FSHD2. FSHD2 is still caused by DUX4; it just so happens that SMCHD1 is a really important part of the zipping mechanism. Without SMCHD1 functioning properly the skein of DUX4 yarn can still unravel and wreak havoc on cells.

The identification of SMCHD1 as the cause of FSHD2 reaffirms that DUX4 is a central player in the initiation of muscle wasting. But there is still a lot to be learned. Friends of FSH Research has helped fund studies that make paragraphs like the previous ones possible. 8 years ago, we were not confident that DUX4 was causing the disease, no one had heard of SMCHD1, and D4Z4 units were just triangles in a lab notebook.

Because of your support, donations, and attendance at our annual auction, we are able to continue to support the ground-breaking research towards a treatment or cure. We have a focused strategy to accelerate research, and renewed optimism that FSHD is a treatable disease.

Join our circle of Friends, keep up to date with what's happening, and as always you can contact us if you have any questions about FSHD or our organization.

One in four people with FSHD is confined to a wheelchair, and there is no cure yet.

See also the recent Auction videos that provide a brief glimpse into a life with FSHD.

DNA is tightly packed with no Dux4 Expression 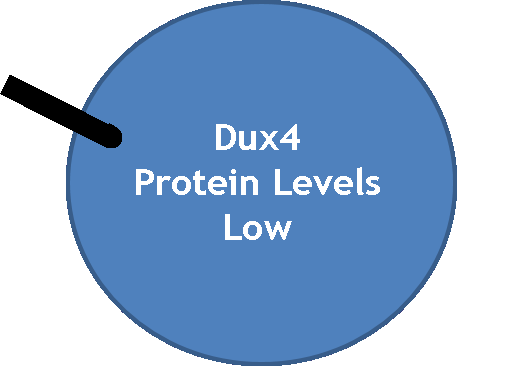 DNA is unwound with High levels of Dux4 Expression 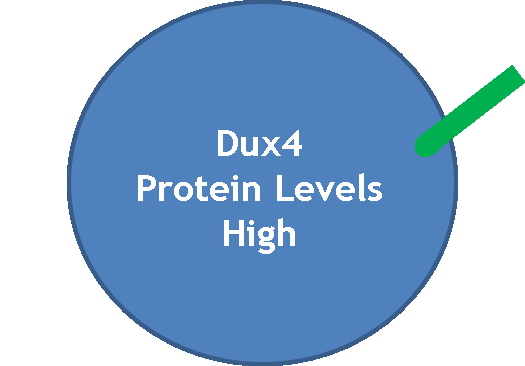